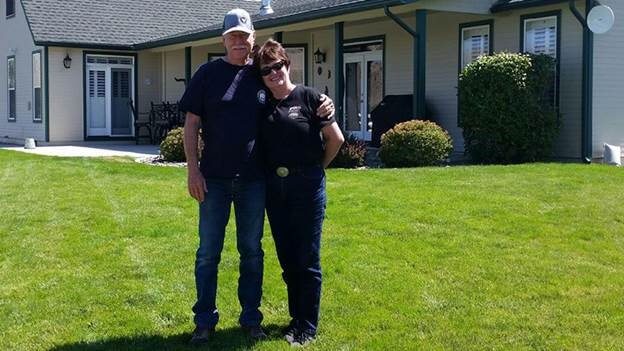 Jim wasn’t feeling well. In the weeks following a colon surgery, he felt excessively tired, had a low-grade fever and his surgical incision wasn’t healing. The incision that wouldn’t heal was the reason Jim ended up in the ER in February of 2018, and it could be the reason he has many more years ahead of him.

From that ER visit, doctors diagnosed Jim with Acute Myeloid Leukemia (AML). While he had been tired with an intermittent fever prior to his colon surgery, the symptoms were never quite bad enough to convince him to see a doctor.

Jim muses about his colon surgery and poor recovery, “Now it feels like a blessing in disguise.” After all, it got him diagnosed with AML much earlier than he otherwise would have.

As a retired California Highway Patrol officer, Jim was accustomed to running toward danger, being in control and making split-second life and death decisions. Cancer changed that and changed him. “With cancer, you have no control,” Jim relays. “You have to depend on everyone else.”

Doctors presented Jim with several treatment options, among them travelling to Salt Lake City or Sacramento. Jim was not interested in long-distance care. His wife of 33 years, Roxanne, and his best friend were in Carson City and that’s where he wanted to fight his cancer battle. He asked for recommendations around the hospital and one name kept coming up – Dr. Jorge Perez.

“Dr. Perez showed up that first night after hours,” Jim explains. “I don’t remember exactly what time, but it was late. That’s how he is. He makes himself available to you 24/7. I don’t know when he sleeps.”

They started chemotherapy treatment right away. In addition to fighting cancer, Jim was recovering from colon surgery and a subsequent blood infection, so the first round of chemo was a bit rough. They took a break to let his body heal, then resumed the intensive in-patient chemotherapy. In April, prior to Jim beginning his second chemotherapy cycle, Dr. Perez ordered a bone marrow test – the AML was in remission.

Six months later they again tested his bone marrow and again it showed that his cancer was in remission.

It’s been a few months since Jim completed treatment. Every day he feels better and stronger and is getting back to normal physical activity with neighborhood walks and workouts with a band. But like many cancer survivors, Jim says the disease changed him.

“I look at life differently now,” says Jim. “Things that used to bother me don’t anymore. I try to be more tolerant of people and do something kind for others less fortunate.”

Among the ways he’s helping others is by participating in cancer clinical trials at UC Davis and offering support and a sympathetic ear to others facing a diagnosis – particularly those in law enforcement.

“Fighting cancer is a job, it’s a lot of work. If you don’t have a good partner and good support group it can be pretty rough,” Jim explains.

Jim is pleased with his choice to stay local for his cancer treatment. “I wouldn’t hesitate to recommend Dr. Perez,” he says. “He’s always willing to spend time, he’s not one of these docs that gives you 10 minutes and out you go. I can’t imagine fighting this fight, and following this journey, without being here in town and having Dr. Perez.