As a long-term resident and three-term Carson City Mayor, Bob Crowell knows a thing or two about what it takes to bring a community together.

It takes hard work, consideration, and a lot of sweat. At Carson Tahoe, we take the same approach because understanding the needs of the people we serve is critical to achieving a healthy community. We’re continually striving to identify and improve disparities in access to medical care. One way we can do this is through establishing strong relationships with community partners – working together to ensure the well-being of our friends, family, and neighbors – neighbors like Mayor Crowell. 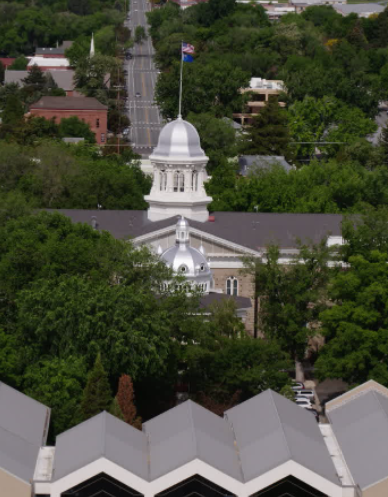 Now in his 12th and final year of service, Mayor Crowell is no stranger to Carson Tahoe. For starters, all of his four children were born at Carson Tahoe Hospital, and as an avid marathon runner, Bob has had his fair share of athletic injuries. For example, he was involved in a skiing accident 20 years ago and went to Carson Tahoe for surgery - he still has a rod in his leg to prove it. And when he was diagnosed with prostate cancer in 2006, he sought care at the Carson Tahoe Cancer Center (he’s now cancer-free, by the way!).

Most recently in 2019, he acquired a serious respiratory illness, which left his wife calling 9-1-1. Bob says he really doesn’t remember much after that until he woke up in the ICU! He was later moved to room 300, which he now swears is his lucky number, and to top it off, it has a terrific view of the city he knows and loves.

“I always thought I was bulletproof,” Crowell admits. “But when life reminds you that you’re not invincible, it’s great knowing there are outstanding physicians and world-class care right here in our own backyard,” Crowell says. “I can honestly say they’ve saved my life, not once, but twice.”

Being a native Nevadan, Mayor Crowell has watched as Carson Tahoe grew from a small community hospital to a comprehensive regional healthcare system – just as the city he loves has grown and evolved, so too has the healthcare family that cares for it.

“We’ve been fortunate to have such a staunch supporter in Mayor Crowell,” said Michelle Joy, Carson Tahoe Health Vice President and Chief Operating Officer. “Over his tenure as mayor, he has overseen the growth of Carson City and stood behind Carson Tahoe through their growing pains, recognizing the need for great care close to home.”

Mayor Crowell adds, “Having Carson Tahoe is wonderful for our community and it’s important that it continues to thrive”. He knows there are several key draws for someone moving to a new city, and healthcare is one of them.

Ultimately, forging strong relationships is second nature to a city leader and a healthcare system, so it's no coincidence that Carson Tahoe and our mayor share so many common bonds. As he moves on to the next chapter in his journey, we honor all the Mayor has done to help us enhance the health and well-being of our community.

Back to Main Page